We are sorry, there are no rooms available at this accommodation at the moment

Best Value on the Kuta Beach Bali, one of only a few Beachfront hotel situated adjacent to the Kuta Art Markets and within easy walking distance of the shops, restaurants and attractions of Kuta Bali. With its typical hospitality, this 4 Stars hotel offers combination of Traditional and Modern atmosphere.

The most famous resort overlooking to dazzling blue of Indonesian Ocean with its beautiful sunset.
Only 4 miles from Ngurah Rai International Airport, 8 miles from Denpasar City. Grand Inna Kuta offer instant access to everything that has made Bali legendary – fabulous shopping center, exciting nightlife, art markets, boutiques, public transport and other superb hospitality can be reached within one minute.

Rooms:
With its typical Hospitality, Grand Inna Kuta designed with 2 styles of building, Bali Wing and Beach Wing with total of 322 rooms. Featuring Traditional room style with private balconies, The Bali Wing designed for those seeking local Bali atmosphere. While a modern touch at the Beach Wing alternatively offers an exclusive atmosphere with various choices of view from your room.
The rooms are air-conditioned and non-smoking. They come with bathroom amenities and slippers. Minibar, TV, Safe, tea/coffee maker and 24-hour room service are provided.

We are sorry, there are no reviews yet for this accommodation. 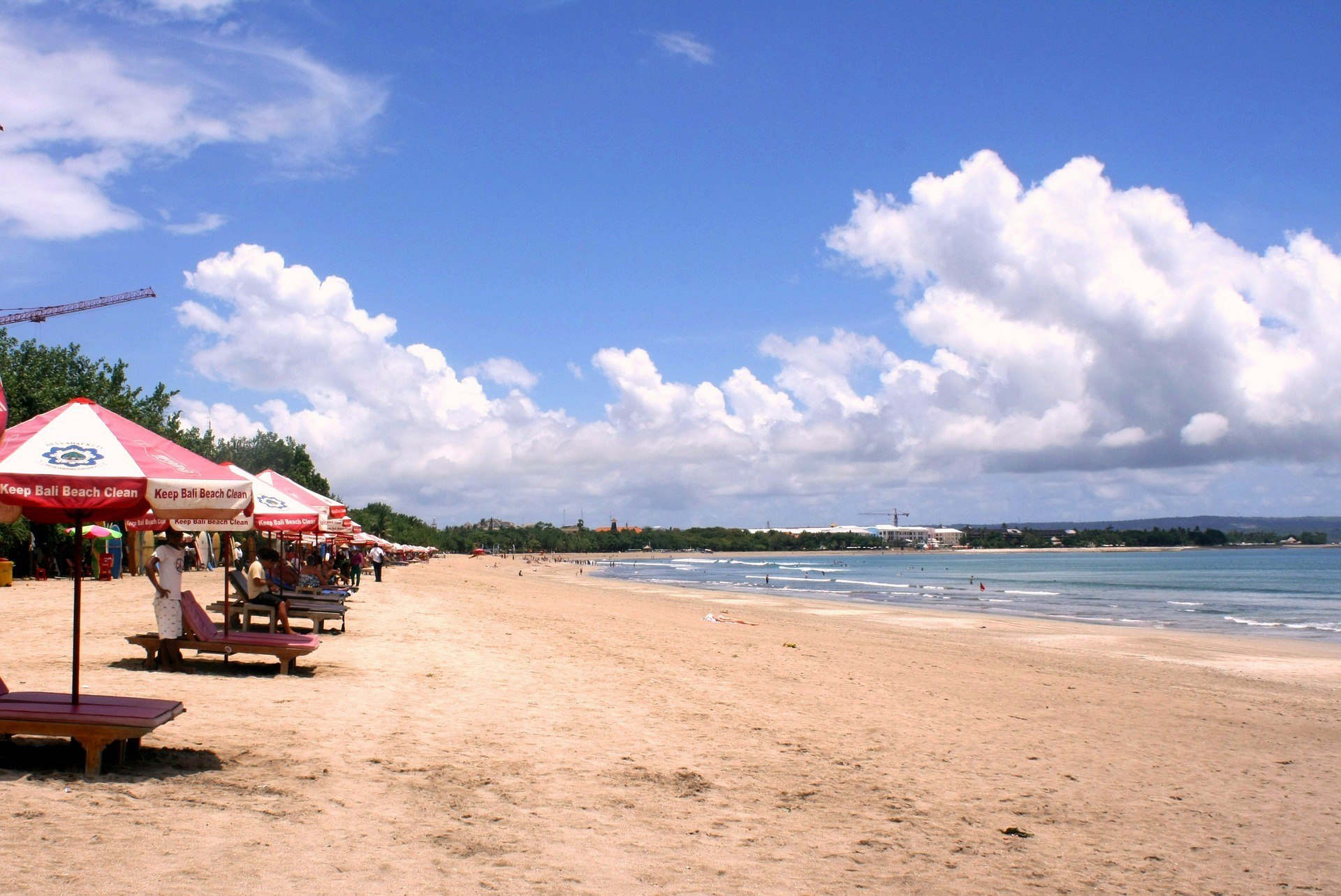 Once a lonely village on the road from Denpasar toward the Bukit Peninsula, Kuta is now a thriving tourist resort, popular mainly among the young. It is a beach for surfing although currents make it less suitable for swimming. Coast guards, however, are on constant duty during the day. Kuta faces toward the west offering beautiful sunsets. The beach sweeps in a golden arc from the airport in the south all the way along the coast to the north for tens of kilometres.
Accommodation ranges from international hotels to low budget home stays. Find here our hotel finder
The village abounds with restaurants, shops, discotheques and other tourist facilities. It is easier to find regular performances of Balinese music and dance in Kuta, staged specially for tourists, than anywhere else in Bali. Some performances are staged nightly.
The village is ideal for meeting and mixing with other people, locals as well as visitors from abroad.

The five km long sandy stretch of Kuta is arguably the best beach front in Bali. The beach is safe, partially clean, well-maintained, although the beach vendors remain annoying pushing massages, hair braiding, cigarettes and surf boards. The long wide stretch of sand is often full of sunbathers and although most of the serious surfers have moved on to newer pastures, there are still plenty of surf dudes around at most times of the year, and especially so during peak season.
As you move north along the beach to first Legian and then Seminyak and Petitenget it becomes progressively quieter and less frenetic.
Two of the most popular laneways are called Poppies I and Poppies II where bars and restaurants are packed in among shops and guesthouses / losmen (cheap hotels). It is easy to get lost in this area and just as easy to pop back into civilisation again as most roads lead either to Jalan Legian, Jalan Pantai Kuta or one of the Poppies lanes. The main backpacker area is on a lane that runs in a northerly direction off Poppies II and is confusingly referred to as Jalan Benesari even though this is also the name of the road further north that travels east to west and connects the beach to Jalan Legian.
The area of south Kuta closest to the airport is more correctly known as Tuban, but this name is rarely used.
Due to the ever increasing popularity of Bali, Kuta is continually developing, and is not short of unsightly, poorly planned buildings. It can come across at times to be chaotic, overcrowded and congested. However, amongst all the mayhem this place somehow works, and hundreds of thousands of visitors enjoy their time in Kuta every year.

Everybody looking for some action and fun in the evening goes to “Kuta” which nowadays means the area extending about 4 miles or 7 kilometers North from the original village of Kuta and includes now Legian, Seminyak and even Basangkasa. Here are most of the better entertainment places offering everything single male or female visitors as well as couples might be looking for.

There are several places such as Sky Garden Discotheque on Jalan Raya Legian. There are 5 different dancefloors on 4 floors and one rooftop floor “Sky Garden”. The huge (air-conditioned) main dance floor is often crowded, guests are a mix of locals and younger foreign visitors.

Close to the center of Kuta you find the BOUNTY SHIP with a noisy, air-conditioned disco in a big rebuild sail ship.  PADDY’S not far from the original PADDY’S is a popular Disco where you can get cheap drinks and . Much more “IN” nowadays is the newer M-BAR-GO which features really good music and a better crowd than most other places.  When most places close around 2.00 or 3.00 in the morning, night owls of all kinds continue drinking at nearby MAMA’S until sunrise.

For a somewhat more civilized evening out, you can have dinner and a couple of drinks at the bar at either TJ’s or KORI in Kuta, at the open street side bar at NERO Bali right opposite AROMAS Restaurant in Kuta, at the re-built N-R-G in Kuta, at MADE’S WARUNG in Basangkasa.

You’ll find a large and quite popular HARD ROCK CAFE right at the beginning of Kuta’s beach road with live music from 11 p.m. to 2 a.m. Expect to find many singles of all kinds here looking for company. If you think this is too noisy, too crowded, or the air-conditioning too cold for you, try the CENTER STAGE at the HARD ROCK RESORT located in the back of the CAFE. As the name implies, the band performs on a raised stage in the middle of the huge round lobby bar until 11:00 p.m. Both HARD ROCK outlets are expensive by Bali standards.

One of the most “in” and upper class venues in Bali is KU DE TA right on the beach adjacent to the Oberoi hotel. This is the place to see and be seen, and from late afternoon there is a DJ providing rather noisy entertainment for Bali’s beautiful people. This is a great place to watch Bali’s famous sunsets, but expect to pay for a cocktail around US$10 and more.
Cool hang outs are also the trendy HU’U Bar & Lounge near the Petitenget temple, LA LUCIOLA and THE LIVING ROOM.   Find here the Seminyak travel information

Kuta stretches along the beach front all the way from the airport to Legian, and small lanes lead from the beaches into the densely populated accommodation zone. To avoid traffic-related frustrations, the best option is a combination of walking in small lanes and using metered taxis or a rented motorbike for longer excursions. Traffic jams are a constant hassle here and especially so when it is raining. It is often best to park your car before you reach downtown Kuta, and walk in. Metered taxis (taksi berargo) are ubiquitous on the streets of Kuta and are a relatively cheap and reliable way to get around, especially at night. Avoid any taxi where the driver refuses to put the meter on. 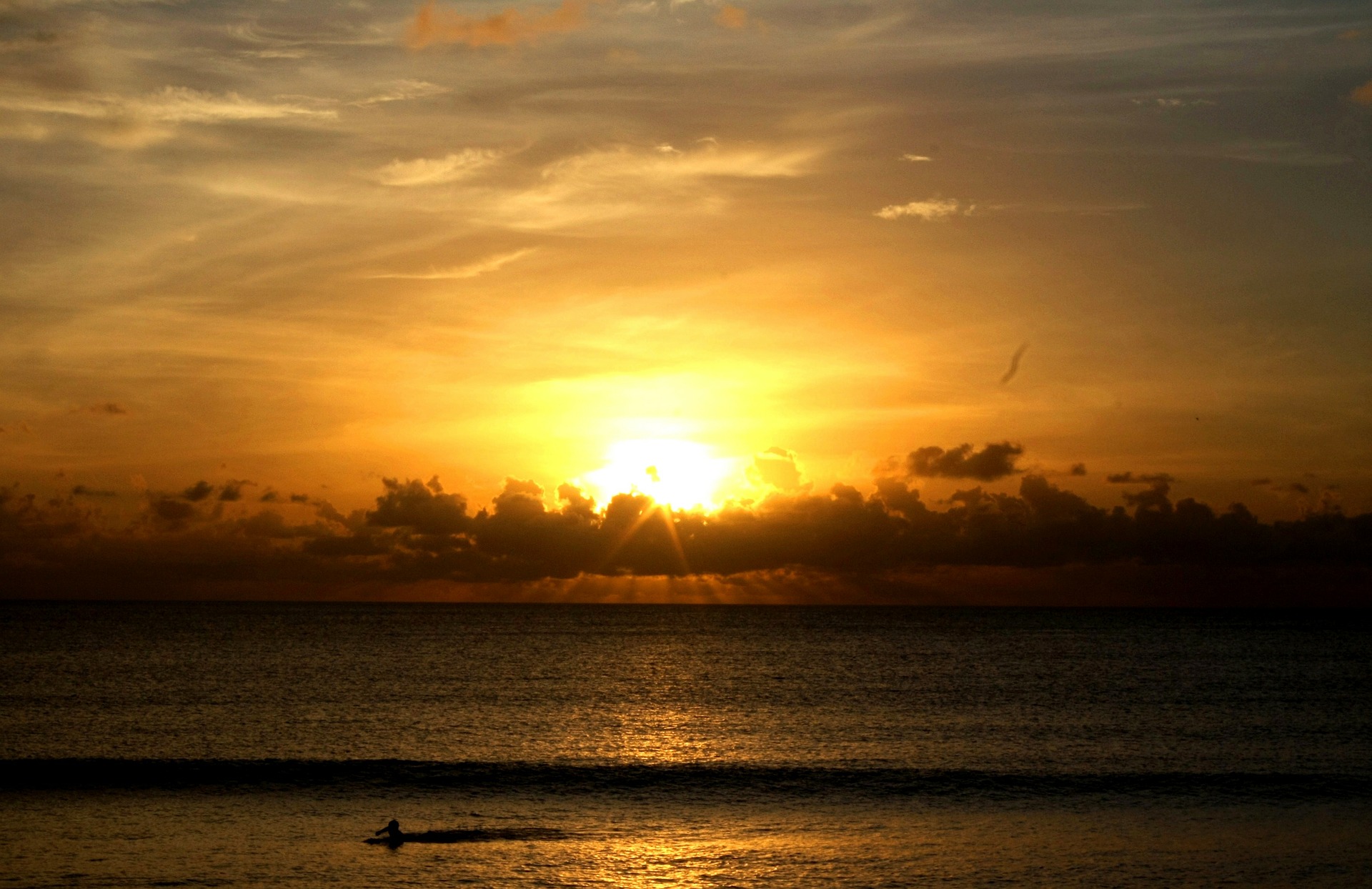 There are many events in Kuta and interesting attractions are very thin on the ground. The beach is of course very scenic here, if nearly always crowded.

Bali Bomb Memorial: This is a memorial to the 202 people murdered by the bombs on 12th October 2002, and is on Jl Legian opposite the corner of Poppies II. This is the former site of the old Paddy's Bar, and opposite the former site of the Sari Club, which is still an empty space, next to the Billabong shop. Every year on the anniversary date there is a ceremony mourning those killed or wounded by the bombs. Whilst viewing the memorial, please be calm and silent out of respect. The local Balinese will often be curious to learn if you knew or were related to any of the victims.

Beach offerings: In the mornings you regularly see Balinese people throwing offerings into the sea, especially when Nyepi is approaching. The best spot is the temple right next to the beach about 200-250m to the north of the Hard Rock Hotel.

Pantai Kuta: The beach is specially at sunset time full of locals who enjoy the beautiful sunsets at famous Kuta Beach. A big attraction for Indonesians from Java and other Islands. 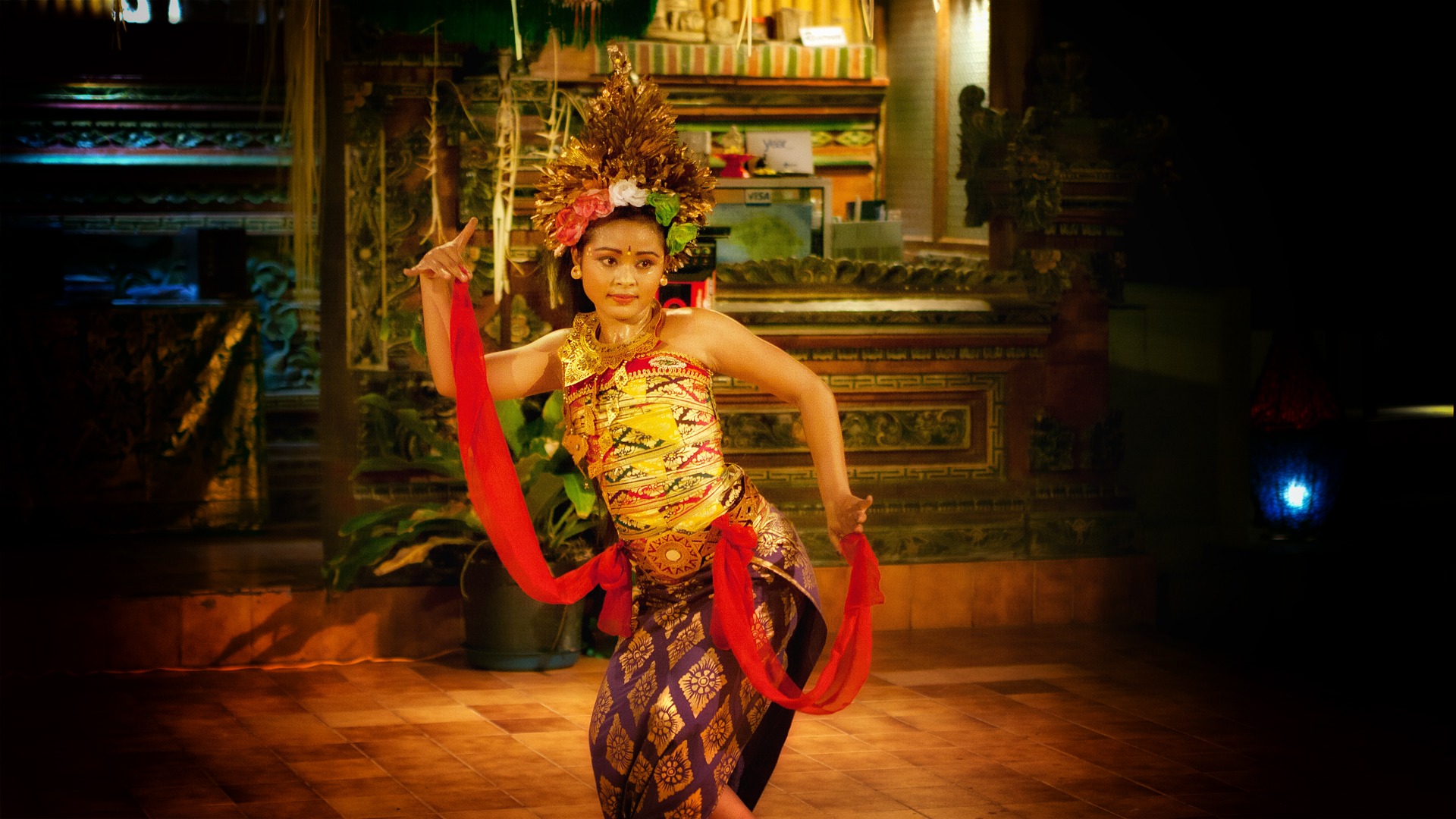 Kuta Beach is famous for: Surfing, Nightlife, Shopping, Cultural Shows at some Restaurants and Places.

Kuta is a well known destination amongst surfing enthusiasts. A long sandy beach with a lack of dangerous rocks or coral, makes the area attractive for beginners.

There are Spas by the dozen, and as Kuta is the most competitive place in Bali, prices are the lowest (as is the quality of experience). Shop around and ask for package discounts. Take a look at the place first and do not allow yourself be talked into something by touts. A well known spa is Villa de Daun on Jalan Legian. Many hotels have their own in-house spas or partner with a local operator. Reborn and Cozy are two excellent spas on the outskirts of Kuta, on Sunset Road just before the roundabout. The price is around 200.000 RP for 1-hour, but have "happy hour" specials.

Shopping: There are lots of popular surfwear/sportswear stores including Volcom, Rip Curl, Rusty, Surfer Girl Billabong and Quiksilver. These well known brands can be purchased in Kuta at prices 30% to 50% lower than you will pay at home. Your best bet is to wander the length of Jalan Legian between bemo corner and Jalan Melsati where you will find an almost unbelievable number of outlets.