The Bukit Peninusla in South Bali includes the famous cliff-hanging temple at Uluwatu, a number of Bali’s very best beaches including Balangan, and the top surfing spots on the island. As is so often the case, it was intrepid surfers who really opened up the eyes of the world to this part of the island. The two main towns with strong local communities on the Bukit are Pecatu and Ungasan. A new tourist atea developement is Dreamland with Restaurant, Beach Club, Disco, etc.

The Bukit Peninsula is connected to Kuta through Jimbaran by the busy Jalan Bypass Nusa Dua and this is the only route in. Take this main road south to the junction with Jalan Uluwatu II (the famous McDonald’s junction), turn west towards Jimbaran Bay, continue about 2 km and at the four road junction make a sharp left up the hill (signposted for Uluwatu). Continue on this road into the heart of the peninsula.

The best attractions in Uluwatu and Bukit, Bali’s southern limestone cliff-fringed peninsula, include one of the island’s most iconic temples, together with gorgeous coastlines that also serve as world-class surfing playgrounds.

Balangan Beach is a notable mention in Bali’s collection of ‘hidden beaches’ and pro surf breaks. It is the gorgeous coast that the signature hole 15 of the New Kuta Golf course overlooks. The beach is only a dozen steps down from the cliff, but it’s a good idea to head up the hills beforehand and take a peek from the vantage point for great panoramic angles.

Pandawa Beach, also referred to locally as ‘Pantai Kutuh’, is one of the island’s southernmost beaches, featuring a kilometre stretch of white sand that is great for swimming and a variety of water sports. A number of local restaurants also line the coast, offering anything from pastas, burgers, steaks to Indonesian fried rice and seafood barbecues
Getting arround:
A taxi from Kuta to Uluwatufor example takes 30 to 40 minutes on winding roads and will cost about Rp 120,000 one-way. If you are just visiting for the day, consider asking the driver to wait trip as it can be difficult to find transport back. Exploring the Bukit peninsula lends itself very well to a rent motorbike. A number of the nicer beaches are reached via small roads or dirt tracks and a motorbike is the best method. Motorbike or scooter give you solution for jammed traffic. 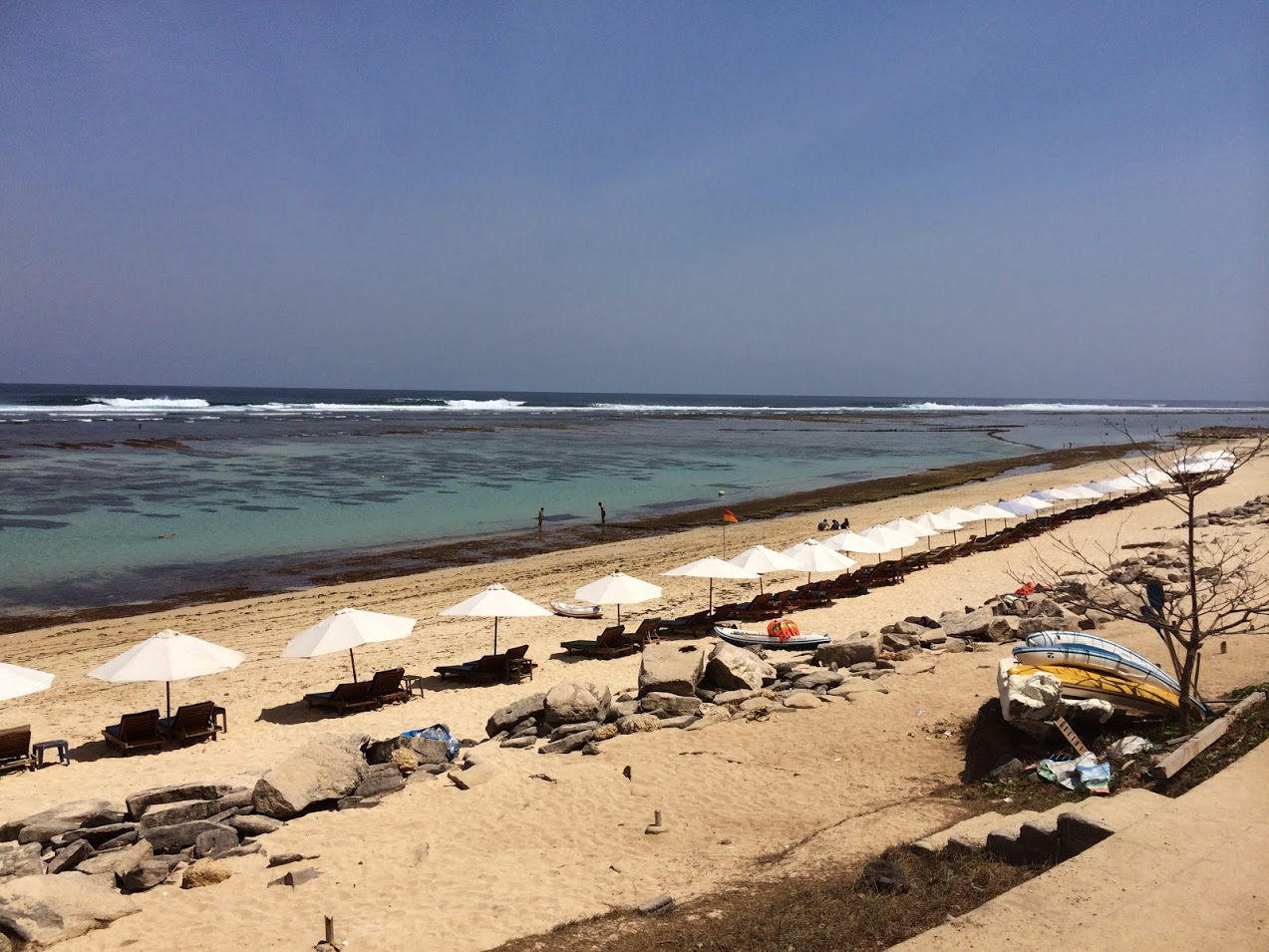 Uluwatu Temple (Pura Uluwatu) is one of Bali's nine key directional temples. Though a small temple was claimed to have existed beforehand, the structure was significantly expanded by a Javanese sage, Empu Kuturan in the 11th Century. Another sage from East Java, Dang Hyang Nirartha is credited for constructing the padmasana shrines and is claimed to have attained Moksha here. Even more remarkable than the temple itself is its location, perched on a steep cliff 70 metres above the roaring Indian ocean waves. There are more steep headlands on either side and sunsets over Uluwatu are a sight to behold.

Garuda Wisnu Kencana Cultural Park with 240 hectares area has many facilities such as amphitheater, Street Theater, Exhibition Hall and Lotus Pond besides a statue with 146 meters height and 64 meters of Garuda wing span will be the largest statue in the world when completed. The statue represent god Wisnu with his mount a Garuda bird. Some parts of the statue such as Wisnu chest statue has been completed and can be seen how big the statue is. <p< Balangan Beach (pantai balangan), Jalan pantai balangan, Ungasan, balangan beach is in area of Bukit of the peninsula with beautiful sea views as well as one of the best sunsets in Bali. Balangan is very beautiful place as unspoiled and few tourists who visit here, just the surfers who know this place.

Dreamland - As one in the collection of secluded beaches obscured by rugged limestone cliffs around the western coast of the Bukit Peninsula, Dreamland Beach is accessible past the vast mega complex of the Pecatu Graha and Pecatu Indah Resort. Here, you can enjoy great waves for surfing, and the sweeping views of its fine stretch of golden sand against azure waters of the Indian Ocean.

Padang-Padang is a truly lovely beach with a big surf break offshore. Accessed from a stepped pathway on the north side of the obvious bridge 3 kilometres north of Uluwatu Temple heading back towards Pecatu. The white sand beach here is a little bit narrow at the highest of tides but is otherwise very nice indeed.

Pandawa Beach located in Kutuh village, a small village in the southern part of Bali. It just 15 minute from the centre of Nusa Dua hotel complex area.

Suluban Beach, also known as Blue Point beach, is the neighbouring pro surf spot north of Uluwatu. The beach features a narrow stretch of sand, which requires descending a steep staircase and going through rocky openings to reach. Its name means ‘to crouch under’ in Balinese, inspired by the act of getting through these openings. Surfers from all over go for its long and powerful swells, and it also provides consistent barrels to ride through.

Bingin Beach forms part of south Bali’s group of world-class surf spots, only several kilometres from Padang Padang and Uluwatu. The beach features a calm and relaxing limestone cliff-fringed coastline, with waves and a reef break that is strictly for advanced riders. Great swimming and snorkelling can be had during lower tides, and non-surfers can also enjoy the beach up high from the hills overlooking the coast and horizon.

Uluwatu is a very well known destination among surfing enthusiasts. Most of the surf spots are only suitable for advanced or expert surfers though - the waves are big here. The main surfing spots are Uluwatu, Dreamland, Padang-Padang, Bingin/Impossibles and Suluban.

See the Kecak Dance (monkey dance) performances, the dance show are held at Uluwatu temple daily between 6PM and 7PM. Tickets for the visually spectacular, if rather unoriginal show (it was invented in the 1930s). As one of the most captivating dance performances, the Kecak dance, also frequently dubbed ‘the monkey chant’ or the ‘fire dance’ due to its use of a tall fire torch as its centrepiece, is one of the island’s most famous performances. It features an artistic live rendition of an episode from the Ramayana epic, particularly involving the monkey army and its main protagonists and antagonists, namely Rama and Sita, and the evil Ravana.

Shopping: There are the usual souvenir shops at the parking area at the entrance to Uluwatu temple. Otherwise, this is not an area of Bali known for its shopping. There are convenience stores and small supermarkets in the villages of Pecatu and Ungasan for everyday shopping.

Play Golf - The New Kuta Golf is one of the island’s premier golf courses, featuring a championship standard course and Indonesia’s first links style layout. The par 72 golf course offers enough variety to ensure a satisfying experience for all golfing skill levels. There are 18 holes, with its signature cliff-top hole 15 overlooking the gorgeous Balangan Beach. The whole course covers a vast 85 hectares with turf consisting of seashore paspalum grass.

For one of the must-see cultural performances, head to the open amphitheatre right next to the Uluwatu Temple to see the kecak dance against a dramatic sunset backdrop, or head to the Garuda Wisnu Kencana Cultural Park in Jimbaran.

Surfing - Bukit attracts wave riders from around the globe to its variety of surf spots. In Uluwatu and Balangan you can find some of the best surf spots of Bali.

The growing number of five star resorts on the Bukit Peninsula all have top class restaurants (and prices to match). Alila and Karma Kandara are especially highly rated. At a more humble level, there are a host of simple local roadside cafes catering to the young surfing crowd at Bingin, Padang-Padang and Uluwatu.

Unfortunately there are no hotels at this location at the moment.

Hotels on the Bukit Peninsula:

Unfortunately there are no self-catering offers at this location at the moment.

Unfortunately there are no tour offers at this location at the moment.

Please visit our "tours" section, to see all of our Bali tours we offer. You can start from any point of Bali for this tours. Hotel pickup and dropoff are inclusive.

Unfortunately there are no cruise offers at this location at the moment.

Unfortunately there are no car rental offers at this location at the moment.